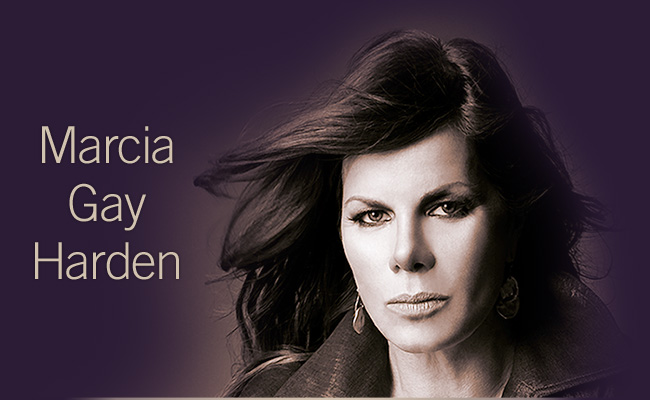 Award-winning actress Marcia Gay Harden has forged a remarkable body of work, always staying true to her chameleon style of "becoming the character." Her character portraits have been described by critics as "searing", "heartbreaking", "inventive", "pure and profane simultaneously", "astonishing", "authentic", and "sensuous". From the glamorous Ava Gardner in "Sinatra", to the artist Lee Krasner in "Pollock" (for which she won Best Supporting Actress Oscar®), to the down and out Celeste in "Mystic River" (another Academy Award® nomination) Marcia has created a signature style based in character transformation. Her versatility and wide-range have been praised in such films as "Millers Crossing", "The First Wives Club", "Meet Joe Black", "Mona Lisa Smile", "The Hoax", and "Used People."

Currently Marcia can be seen next is the highly anticipated Universal film "Fifty Shades of Grey", in which she plays Christian Grey’s mother. The release of this film was Valentine’s Day 2015. Recent projects include "Elsa & Fred" starring the legendary Shirley MacLaine and Christopher Plummer, the ABC comedy series "Trophy Wife" which starred Malin Ackerman, Bradley Whitford and Michaela Watkins and Woody Allen’s "Magic in the Moonlight", starring Emma Stone, Colin Firth and Jacki Weaver. This fall, Harden reprised her role as First Amendment attorney Rebecca Halliday in the critically acclaimed guest star role on Aaron Sorkin’s HBO series "The Newsroom."

Marcia has chosen a life away from mainstream Hollywood, crossing between independent and studio films, and television and theatre. In 2011 Harden reprised the role she originated on Broadway in the Tony Award® winning play "God of Carnage" along with the original cast with a tremendously successful stage run at the Ahmanson Theater in Los Angeles. In 2009, it was her exceptional Broadway performance in this starring role that garnered her the Best Actress Tony Award®. Her fellow-nominated co-stars in the play included James Gandolfini, Hope Davis and Jeff Daniels. Additionally, she received an Outer Circle Critics Award for her performance, as well as nominations from the Drama Desk and Drama League. That same year, she was nominated for an Emmy® Award for Outstanding Supporting Actress in a Miniseries or Movie for her role in "The Courageous Heart of Irena Sendler."

Additional television appearances include:
A recurring role on ABC's "How to Get Away with Murder," starring in Lifetime’s "The Amanda Knox Story", portraying Amanda’s mother Edda Mellas opposite Hayden Panettiere, and co-starring in the critically acclaimed FX drama "Damages" opposite William Hurt and Glenn Close.

Additional film credits include:
"Parkland", which also starred Billy Bob Thornton, Paul Giamatti and Ron Livingston, "If I Were You" co-starring Aidan Quinn, "Someday This Pain Will Be Useful To You", with Peter Gallagher and Ellen Burstyn, "Detachment" co-starring Adrien Brody, Christina Hendricks, and Lucy Liu for Tribeca Films. Harden co-starred in Drew Barrymore’s directorial debut "Whip It", in which her daughter Eulala Scheel also had a co-starring role, "The Maiden Heist" with William H. Macy, Morgan Freeman, and Christopher Walken, "Canvas", "Rails and Ties," Stephen King’s "The Mist" (for which she won a Saturn Award,) Sean Penn’s "Into the Wild", and "The Christmas Cottage" with Peter O’Toole.

Harden graduated from the University of Texas with a B.A. in Theatre and an MFA from the Graduate Acting program at New York University.